Rick Abbott (aka American ER doc gone walkabout ) has been an ER Doc since 1973 and has bad wanderlust. He is currently Assistant Clinical Professor in a University teaching hospital in Denver, Colorado, but full time academia would be too hard on his limited attention span - a variety of travels have taken him to Tasmania, American Indian Health Service Hospitals, and rural farm country hospitals. He also likes to see medicine from the other side, which he achieves by crashing his bicycle on a regular basis, and now he has branched out to see the world of "elder care" from the receiving end of a stroke alert… 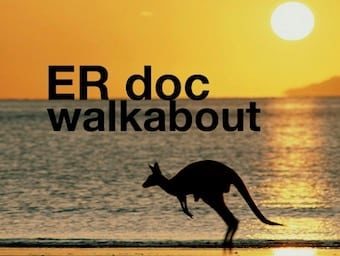 Welcome to the Land of Protocols, home of the Clinical Pathway (closely related to the Yellow Brick Road). (I’m not trying to make any direct connection to the Wiz, but…).

Let’s go back a few decades: a person presents to the ER with signs of sepsis and a low blood pressure. We evaluate the neck veins, listen to the lungs for crackles, maybe evaluate the BP response to Trendelenberg positioning.

Rick Abbott is back with more notes from SAEM 2014 – now his head hurts.

Rick Abbott reminisces on his adventures over the years in relieving esophageal obstruction from food boluses.

American ER Doc Gone Walkabout Episode 026 Wise use of EBM makes us much more reasonable Doctors. I meet a young woman, previously healthy… She’s had a little fever, some congestion, has been coughing and sneezing for a few days, and now her chest hurts. She’s been a little wheezy and minimally dyspneic with exertion. […]

American ER doc gone walkabout Rick Abbott shares some ideas about end of life discussions in the emergency department. This post is inspired by a recent EM:RAP podcast…

Rick Abbot is back at last, with the tale of his own potential neurological catastrophe – with musings on delayed ED presentations and the quality of neurological physical examination.

American ER Doc Gone Walkabout Episode 023 Let’s take a single complaint – “sore throat” – and look at a few of the ways that it can be handled. Let’s say that we’re satisfied with having a good outcome with no further intervention, say 90% of the time. And, another 9% of the time we […]