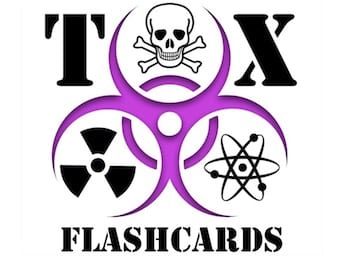 Anticholinergic Toxidrome was one of the first flashcards I designed. I wanted to make a play on the old mnemonic: mad as a hatter, hot as hell, red as a beat, dry as a bone, and blind as a bat.

I really enjoyed drawing the Cyanide Poisoning Antidotes flashcard. I really put Travis to the test by drawing out biochemistry pathways…

Cholinergic Toxidrome was the first flashcard I created, and forever encapsulates Travis as “the guy on the toilet”

I drew my inspiration for the Extrapyramidal Side Effects flashcard from the pop photography of Andy Warhol.

In the flashcard we added the classic dead baby on the ceiling as seen later in the film. Lastly, while I didn’t include an antidote flashcard for Narcan (Naloxone), I would have surely drawn inspiration from Renton’s visit to Mother Superior.

In this flashcard I drew my friend and colleague Dr Jawad Kassem, a Board Certified Hyperbaric Medicine doctor.

Ipecac is no longer recommended for the induction of emesis in acute toxic ingestions, but it is fun to meme its use with the Family Guy

It is probably more appropriate to use the term ‘cannabinoid analog’ rather than Synthetic Marijuana, but now we’re talking semantics.

Hydrogen Sulfide Poisoning is by far my favourite illustration, where we once again see Travis reprise his role as “guy on the toilet”.